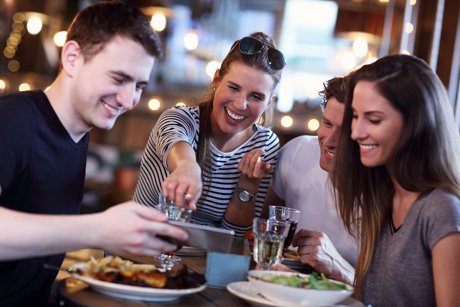 Hungry tummies on Middletown property call out for barbeque. The best of the best is just around the corner at Mark’s Feed Store. Influenced by East Kentucky “third generation masters” the aromas coming out of this little restaurant are big, bold and satisfying. Only the finest ingredients go into the kitchen and the results equal pure deliciousness.

The Menu at Mark’s is mouthwatering. Honey wings are super starters especially when paired with onion straws. Fried pickles are five star rated and a customer favorite. The ribs in this house are relentless, filled with flavor and falling off the bone. Combo platters mix it up with barbequed meats. Folks find it hard to decide between chicken and pork. Burgers are a mouth full topped with cheese and bacon. Order them up with spicy fries on the side. Don’t deny dessert. Oreo banana pudding and homemade buttermilk pie tempt even the strictest of dieters.

Get Grub to Go on Middletown Real Estate

Carry out and picnic packages are great for those on the run and somewhere to be. Youngsters are also pleased with their own selections off of the Kids Menu. The grub earns grins with choices such as barbeque chicken, pork, and ribs, burgers and sandwiches.

Don’t be surprised to see Mark’s Feed Store rolling through Middletown property streets. The food truck is filled to the rims with signature dishes and sides. Line up for the good stuff such as honey chicken wings, barbeque chicken and pork sandwiches, baked beans and potato salad. Check out the food truck calendar here.

Recognition is freely given and this barbeque joint has been praised in Southern Living, Nation's Restaurant News and Saveur Magazine. Diners are the best critics and the Louisville Magazine reader’s poll voted Mark’s as best in the city nine times. Mark’s Feed Store originally sprang up at 11422 Shelby Road. This Middletown real estate site was chosen due to its rich history. The historic building created a home town ambience that continues to exist today. Cravings are easily satisfied here and at additional locations found in the Louisville region.